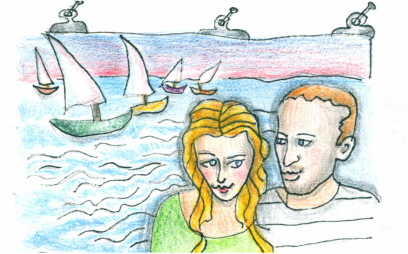 How did it all start?  With tears and a line.

First the tears. High school; I’m dating the star quarterback, Stevie.  Stevie and I were inseparable until I outed him to his own parents.  They were giving us this lecture about waiting until marriage and I burst into hysterical laughter, and blurted “Stevie’s gay, people C’MON!”  We were supposed to backpack Europe together the summer before college, but since they disowned him, he had to give up on Europe and college and go to work slinging hash at the local greasy spoon.

Now the line.  Two years later.  College.  Its after hours at the campus art studio. A masculine voice says:  “I want to paint you.”  A cheesy line, I know.  But you should have seen the boy who said it.  Vince, had these intense blue eyes and a big … paintbrush.

“How do I know you’re any good at painting?” I volleyed back. In a flash he was standing at my side, his arm extended out phone in hand. Click. “Look” he said, showing me the picture “future painting.”

So I’m laughing at him now, right?  “That’s not a painting, that’s a selfie”

“All my paintings are selfie’s” he says, “I do selfie portraits.”

At hearing that, I made sure to open my eyes really wide so he could see me rolling them.
His face stayed totally serious and still.

“Ancestry dot com can’t be wrong” he retorted. “Have you ever seen my cousin’s most famous portrait?”

Did he think I was a philistine?  “Of course” I fired back, “Everyone knows that. It’s called ‘Self Portrait without a beard’, oil on canvas, 1889.”

Before I could mock him again, he’d slid his hand into the small of my back. A delicious hot shiver ran up and down my spine and he guided me toward the back of the studio.  He had this backdrop of a cafe in Amsterdam. Click.  And another of a beach in the Netherlands. Click.  A third of a dirt pile in Japan.  Click.

“How would you like to go all these places with me?”  He asked, “I have a little money saved, enough for two, and we could fly off now on an adventure together!”

My heart was racing, my mind was screaming “No” but another part of me was screaming “Yes, yes, yes!”  It was my voice.  I couldn’t believe what I was hearing.

I never saw him again, he flew off to all those places without me.  Within two months he was the talk of the international art world.  He shipped his paintings back to the university for a show that he did not attend.

The show had two parts.  One part called “Inauthentic Selfie”.  It was paintings of the selfie’s he’d taken of he and I in front of the fake backdrops.  They were all entitled “Selfie’s with a Beard.”

The other part was called “Authentic Selfie.” It was paintings of selfie’s he’d taken at all these places for real and next to him was Stevie. They were all entitled “Selfie’s without a Beard”.

I realized everyone in the university gallery was staring at me. And I knew, not a one was seeing the authentic me. He’d taken that with his suave, cruel ways. To them, I was now only the Beard.

Oh revenge, you are a cruel, cruel little queen.