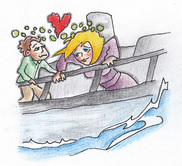 There is no one else for me except your daughter.

See, I’m emetophobic. It’s a phobia of throwing up.  Scared of it worse than death.  Rather be in a coffin than bent over a toilet.   Anything with even the remotest risk of making me sick I avoid.

Except with your daughter Jill.  Whenever I’m with her, I get these butterflies in my stomach.  Which terrifies me. But I can’t stay away.  Worse yet, she has us do these high vomit probability activities together … like whale watching in Bar Harbor, Maine.  4 1/2 hours on a rocking boat on the Atlantic with no escape.  I was like “at least let me take some Dramamine.”

She said it wasn’t facing my phobia if I drugged myself. She found us seats on the top level of the ship.  I told her, “I think my heart is going to explode.  Feel it, it’s thumping hard and fast.”  She had me slow my breathing, and my heart slowed.

About an hour out, everyone on the boat, myself included, seemed good!  But Jill started feeling not so good.  She asked me if I could get a sick sack, “just in case.”  As I got up to find her one, I realized she was just the first domino in a series of people toppling into sickness. They were running for the railings and garbage cans. The sheer number of them was alarming, as if seasickness were a highly contagious virus spreading fast.

I flagged down a crew member who got me a few sick sacks.  I asked him, “Is this normal?  It’s so many people.”  And he says “Oh yeah, between us, the staff call this thing ‘the barf cruise’ because frankly, we see a lot more of that than whales.”  Then he told me “best place to take your lady is bottom back of the boat.  Least rocking there.”

I got Jill, and led her to the bottom level.  It had become like a Casualty Clearing Station on the front lines of a battlefield.  Nauseous people lay splayed across the seats, rocking and moaning.  We took our place among them, toward the back.  Jill was positively green, her eyes bloodshot.  “I have a confession” she said “I’m an emetophobe”

I couldn’t believe it.  “You too?   Why didn’t you tell me?”  She said “I thought I had it under control and I wanted to focus on helping you but …”  She stopped talking suddenly and put the sick sack over her mouth.   Made this sound, kind of like “blechhhhhhh.”  Then screamed in horror.  Then repeated the cycle “Bleccchhhh” “Ahhhhhhh”  “Blecccchhhh” “Ahhhhh.”   It was horrible.

I felt something shift in me.  Realized some part of me had been holding back with Jill.  I’d felt unworthy before, like I was a charity case.  I had it wrong.  And suddenly, I heard myself saying, “I want to be with you, Jill, I mean, really and truly even in sickness, especially in sickness, as long as we both live.  Will you marry me?”

And for one beautiful moment, there was no rocking of the boat, there was no sea sickness.  There were just Jill’s wide surprised green eyes, looking into mine.  Her smile rising up like the sun and the word “Yes” escaping her lips.  Of course, a second later, something else escaped her lips.  And that was too much for me, and I followed her into sickness.  And we went on to have the most miserable and terrifying 3 ½ hours of our lives together.  But for one moment we’d been free and unafraid.

And that brings me to you, sir.   I’d like your blessing.  Every time I’ve thought of this moment, of what you might say.  I get so nervous you’ll say “no.”  I start feeling a little queasy.   And now that I’m here, and the way you’re frowning at me, I’m fairly certain I’m going to toss my cookies.

But I’m here.   Standing before you.   Because I know I’m the perfect guy to take care of her.  Because if you want grand kids, I’m the only guy she’ll be able to face morning sickness with.  Because even if you say “no” and I lose my lunch, it was worth the risk.  So it’s up to you.  Open your arms and say “hello son” or point me to a nearby bush.