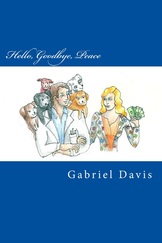 I’ll be out in a minute.  No, in a minute.  Fine, come in.  Close the door.   You want to know why I’m “hiding” in here?  Because out there your mother’s all “Happy Turkey Day, Sally!” and “We’re so pleased you decided to host this year” and “You’re making such a lovely home for our son” and finally “Oh, doesn’t she look pretty in that dress I bought her, dear?”  to which your father replies “Mmm-hmm, sweeter than pumpkin pie.”

I wanted to reply “I’m so glad that despite the eight mergers I helped broker between sustainable energy companies for work, it’s the smell of turkey in the oven and the way I wear a Laura Ashley dress that proves I’m worth my salt.”

Instead I say “Thanks – let me check on the turkey.”

Did you know your mother called me last month?   Asked me to do this for you.   Said you complained about last year to her.  Said you didn’t have the heart to tell me that eating Tofurky with my girlfriends while watching back-to-back screenings of Dances with Wolves and Last of the Mohicans wasn’t really your thing.

I thought you liked my anti-establishment thanksgiving “thing” as much as I did.  I thought you agreed that the genocide and subjugation of an indigenous people by a stronger invading culture was not cause for annual celebration.   And maybe your mother had just heard what she wanted to hear, or taken something you’d said out of context.

So I went to you and I asked “What would you think about having a more traditional thanksgiving this year with your parents?”

To which you replied “Sure, that’d be nice.”   I thought you’d say “But honey, aren’t you opposed to cooking and eating animals when there are perfectly good plant foods we can enjoy?”  But no, you were strangely uninquisitive, just “Sure, that’d be nice.”  Like my sudden transformation from animal rights advocate into Stepford wife turkey killer was perfectly normal.

And maybe I should have just freaked out at that point and let you know how upset I was.   I don’t know, I was in shock.

So I just said “Well, but maybe not.  We don’t want to be like the rest of America, contributing to the November Turkey Genocide.”  I joked “We couldn’t live with the guilt.”

And you said:  “Well its only one month out of the year, and besides the president pardons a turkey to make up for it.”

I decided to learn about the pardoned turkey’s happy retirement to soothe myself.   In the process I uncovered urban legend keepers who tell of a wealthy “benefactor” who donates millions each year to the farm where the pardoned turkey goes.  In exchange, the pardoned turkey is transferred to his estate.  And then, according to black-market-turkey.com, the benefactor eats our national symbol for mercy and kindness.

So most likely, the story of the pardoned turkey is a fairy tale we sell the masses to alleviate their collective guilt, when in actuality some rich bastard is stealing that turkey’s retirement every year!

All this month, I kept hoping any moment you’d grant me a reprieve, let me off the hook.  Tell me it wasn’t right for me to make this sacrifice.  That it was okay if I wanted to spend the holiday in a sweat lodge saying penance.  But instead you stood idly by as I cooked away my identity so your family could have “a nice dinner.”

This monologue is from the play Hello, Goodbye, Peace available in digital and print editions here.