Monologues for Women | "The 85th Asana" by Gabriel Davis 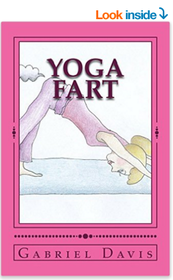 Recently an actress reached out about my monologue “Yoga Fart” saying she loved it and really wanted to audition with it except for one issue … the farts. She was told auditors may find the topic to be in poor taste. Though that part is probably subjective and varies by audition, it got me to thinking: how can the monologue play on the character Amy’s discomfort with the act and the word "fart". What if she had to build up to actually uttering the word head on? They say to writers, use the "f word" sparingly. That's just what's been done here!  - Gabriel Davis (author Yoga Fart)


​AMY:
I … passed gas in Yoga class. It was loud. And I didn't die. My heart started pounding but it did not explode. I thought I would be devastated but I was not. Instead something unexpected happened. I laughed. At first a little giggle and then a full blown belly laugh. In fact, I laughed so hard that I … passed gas again. And again, and again. Embarrassing, no? No. No.

I could feel people staring but I didn't care. I thought I would care. Feel my palms grow clammy, my chest tighten. No. I felt a lightness, wonder, awe. Who knew I had so much air inside me. My body had deflated but my spirit had inflated! I waited for the self loathing to come. But there was only... Stillness. Silence. Then in that silence, a little voice. I love you. Your body is amazing.

I realized, this was why I'd come to yoga in the first place. No, not to release my wind publicly. To release my wind publicly and survive it. I know, it's unladylike. But in the depth of this indignity, I had found my greatest strength. Here I was looking my fear in the face And believe me, I had feared this moment. I had played it out in my mind. And it always ended with all the ladies around me pulling hidden rocks out of their lululemon attire and stoning me mercilessly. But not much happened. Here i was staring fear in the face and realizing...it was a bunch of hot air. And i could release it!

I breathed in deep, so deep another loud exclamation of my new found freedom erupted from my behind. "Excuse me," the woman behind me said. "But could you step outside for a moment. Some of us are trying to practice yoga..." This should have destroyed me. It should have sent me whimpering out of the room. But I felt my calm breath, heard myself say: "Excuse me, but I am practicing Yoga. There are 84 known asanas. This is the 85th. The … fartnassana. Thank you very much."

Then something amazing happened. A little noise erupted from another corner of the room. A few other people giggled, then laughed, and then more noises erupted. And it was beautiful. A symphony of fartnassanas. I was free, they were free. And I realized in that moment...I was free of you, too. You can't hurt me anymore.

This monologue is adapted from the play Yoga Fart available digitally and in print here.

Monologue Genie is a participant in the Amazon Services LLC Associates Program, an affiliate advertising program designed to provide a way for websites to earn advertising revenues by advertising and linking to Amazon.com.