Monologues for women | "Death by Peanut" by Gabriel Davis

Death by Peanut
A comedic female monologue
by Gabriel Davis 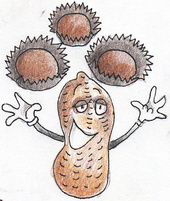 A young actress auditioning for CLUE at her school asked me for a monologue written in that style.  The following was written as a parody and homage to that classic game/movie/play and as a comedic audition monologue for young women.  Enjoy!

Yes, yes, alright!  I did it!  You've found me out!   I killed the cook in the kitchen with the peanut butter!   But honestly, what kind of person goes into cooking with that severe a peanut allergy!?  Yes, yes, I killed him.  But if it hadn't been me, he would have eventually encountered a peanut on his own.

How did I fool him into eating the peanut butter, you ask?   Yes, I'm fairly certain Colonel Catsup asked just now.   Because he's dying to know isn't he?  But I'll never tell.  Alright, I'll tell!  If he insists.  Really if he insists.  Oh don't be a dip Colonel Catsup, just insist. Everyone's waiting for you to.  Great!

So I hid the peanut butter inside of ... chocolate!  Yes!  Everyone knows the cook had a sweet spot for cacao!   But it was I who thought to invent a decadent chocolate treat with a peanut butter filling!   Yes, it was shaped sort of like a very shallow cup. Why do you ask?

Oh alright.  Fine.  I didn't invent it.  You've found me out.  I saw it on the check out line at the grocery store.  It's not like you need a PhD to figure that out, Professor Prune.  But it was my idea to change the words on the packaging from "Peanut Butter Cups" to "Chocolate Cups." In fact, I sent a copy of the wrapper I created to the company, because it's really confusing, calling them peanut butter cups, when really the chocolate part is more of the cup part.

Yes I purchased the murder weapon at check-out in the "impulse buy" section, but I assure you the murder was perfectly pre-meditated. And by pre-meditated I mean, I meditated beforehand.  I closed my eyes and imagined myself filled with light and the cook filled with peanut butter. It was very soothing, since really the whole killing someone thing is not very zen.

You see I'm not the kind of woman who would ... Why if that cook wasn't planning to expose our love affair to the world and ruin my husband's political career and my marriage  ...

Yes, that's right!  The cook was my lover, my paramour!  Don't look at me like that Ms. Flamingo.  I know you've tasted his gentle consommes, lapped up his bisques, eaten his crabs ... florentine.  So don't play innocent.

He was a true artist in the kitchen.  The kind of man who knows how to get into your pantry.  I loved him.  But it was only a short order affair for me and he wanted a 16 course tasting menu!  I kept metaphorically saying "Check!  Check please!"  But he wouldn't listen.  No he wouldn't bring the check!

So I did what I had to do.  I let him cook me his last supper and ended it with a very final "chocolate cup" for dessert.