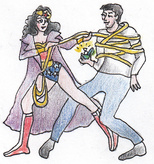 Bob are you sure you want to give me that ring?   It’s a big rock.  I like it.  But you need to know something first.   Something I haven’t told you about myself.

I’m Wonder Woman.  You have asked Wonder Woman to be your wife.  Don’t freak out.  I know, it’s a lot to take in.

Like when people say they don’t know how I do it all and I must be a Superwoman …  they are factually correct.  I am literally a Superwoman.

I’m an Amazonian princess with superhuman powers and superior combat skills.  But I don’t want you to feel like I’m not the same girl you fell in love with.

It’s still me.  I'm still the same sweet, well mannered young woman that enjoys cuddling up by the fire with a book and a cup of chamomile.  But you should also know that I maintain a large arsenal of weapons, have an invisible airplane, and a tiara that I can shoot off my head like a projectile.

Wow, you’re still standing here.  I can’t believe it.  At this point, every other guy I’ve dated has passed out, wet himself, or made a run for it.   But you’re special, you’re different, aren’t you?

Well, at least I hope you are.   You need to understand, my job takes its toll.  I’m often in a bitchy mood after battling mythological monsters or toppling fascist regimes.   And I can’t be defined by a man, I’m a feminist, big time.

Look, I’m sorry I kept my secret identity from you.   It’s really a necessity to give me some downtime from all the supervillains and paparazzi.

But I promise, from now on, there won’t be any secrets between us.   I’ll never keep anything from you, and I’m certain you’ll be totally honest with me.   Literally 100% certain.  I have a golden magic lasso of truth.

So … on that note … moment of truth.  (she lassoes him)  Do you still want to marry me?
Check out the extended, longer version of "Secret Identify", click here.