Monologues for men | "We're all Kings" by Gabriel Davis

We're All Kings Monologue
Monologues for men
by Gabriel Davis 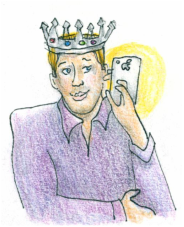 So I said something dumb.  Haven’t you guys ever said anything dumb?

Back in the medieval days if you were unlucky enough to be a low born serf, hopefully you had some charisma because if you were called before the king and you couldn’t get him to crack a smile you’d probably end up on the chopping block.

And that king relative to you, the serf, he had sophisticated tastes. His court was filled with every kind of fascinating, charming, interesting talented person in the kingdom.  And the ones that kept him smiling, kept their livelihood and in a lotta cases, their lives.

Fast forward to today, we’re all kings. We turn on our televisions, tablets or phones and access greater personalities and entertainers, scientists and visionaries, luminaries and clowns than that medieval king could ever have dreamed of accessing in his lifetime.

So its no wonder that when we turn our attention to the actual real people who occupy our everyday lives, we come at them with some frickin’ kingly expectations.

And when they open their mouths to speak, they’re the serfs, and if they don’t delight us, they feel us chopping them. Its rarely overt; today's guillotine can be allowing silence to fall after they've spoken, it can be keeping our face impassive and emotionless or simply refusing to make eye contact. And in the next heartbeat its our turn to speak and suddenly we’re serfs and they’re kings ready to chop us. Its emotional decapitation out there, and its a bloody business. And no one’s safe.

But once in awhile, you go way out on a limb, because whatever it was sounded good in your head but when it comes out of your mouth it drops into the room like the verbal equivalent of a stinky turd.  You hear it plop out into the social scene and you look nervously around, your eyes darting from king to king.

And something amazing happens. One of the kings cracks a smile - as if to say “thanks for your contribution buddy” - and you feel a warm rush of relief.

That’s what I keep hoping will happen with you guys.  I look around and I know you’re all as nervous about getting chopped as I am.  And guys, we’re doing it to each other.  We’re all the kings, its our kingdom.  Don’t we deserve a Golden Age?